Book Review – The Value of Nothing 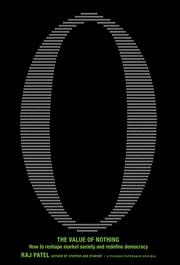 The value of nothing: how to reshape market society and redefine democracyRaj Patel; Picador 2009WorldCat•LibraryThing•Google Books•BookFinder

How do we know how much something costs? Our society has managed to invent prices for items that ignore the true social costs of creating them. Just think, does it really only cost $10 to buy a T-Shirt?  What about the environmental impacts of producing and shipping the T-shirt? What about the person who sewed the T-shirt? What about when the T-Shirt goes in the garbage? Our planet is currently losing three species a day. Yet, the market does not crash every time another species goes extinct. These animals, birds, insects, or fish have no monetary value. The markets do not value biodiversity but humanity cannot survive without it.

The Value of Nothing was written as a response to the economic crash of 2008. While we believe that markets self-regulate and that deregulation increases competition, Patel explains how our assumptions are wrong.

To start, our market economy is a social construct that has been in the making for several hundred years. In this market economy, we chronically overvalue things that are destructive, like oil and coal, while chronically undervaluing things such as the climate, health and sustainably grown food. The profit motive drives decision making. Material wealth is the end goal, which results in increasing inequality. After all, we can’t buy a $10 T-Shirt unless we paid someone less than $10 to make it. The price of that T-shirt does not include the true cost of the pesticides sprayed on the cotton fields or the pollution emitted due to transportation.

Historically, this process started when we began converting commons to private property. When resources such as land, oceans or seeds are privately owned, then some people own more than others. Those at the top of the power pyramid continue to exploit their position to increase profits, while those at the bottom scramble to survive.

If resources are managed by a collective, it is in the best interest of the collective to define the limits of resource use, to reduce private accumulation and to determine how things are shared. We have many examples on our planet of current and past societies living with communal resources. These resources do not have price tags on them but rather have intrinsic value that is understood by all who participate.

“The opposite of consumption isn’t thrift, it’s generosity.”

This site uses Akismet to reduce spam. Learn how your comment data is processed.